This is the basic question which comes into the mind of the students who are preparing for the Banking Exams or who have qualified for the Bank PO post.  It is but natural the curiosity to ask this basic question where do I see my self down to life at the time of retirement.

The answer to this question is also very simple.   If any one gets promotion on time  he or see could easily become DGM [Deputy General Manager] and one of them could become chairman also depending upon the merit, luck and age.

For every Promotion in Banking job one is required to give Written Exam followed by Interview.

So, let me tell you the career path in the Banking Exam. 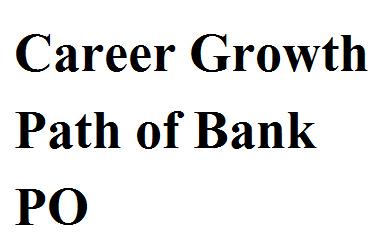 Here is some Bank CGM [Chief General Manager] and MD [Managing Director], directly promoted to Director or Executive Director or Chairman.  In SBI {State Bank Of India] Promotion Slabs are more as compared to other Nationalized Banks.

So, there are are  lots of Growth Opportunities for Bank Po.  Those who joined as a Bank Po easily becomes Chief manager and after that real fight starts for the promotion as in the higher hierarchy very few seats are there.  Definitely after becoming Bank Po there is very good career path .